Cryptograms, also called Crypts, are coded messages in which each letter is replaced throughout by another letter wherever it appears. The term for this is a simple substitution cypher. This means of encoding data goes back at least as far as the Romans although, today, it is suitable only for entertainment. This page provides a brief introduction to cryptograms for both solvers and composers. 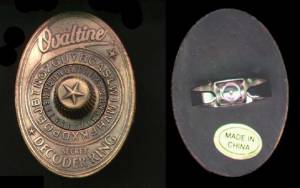 A common example of cryptograms was the “secret decoder rings” of the past which consisted of a fixed alphabet and another alphabet that could be rotated (see the example of an “Ovaltine Secret Decoder Ring”). Those familiar with computers may know the term “ROT13,” which is a specific type of decoder-ring cryptogram where the letter A on each alphabet matches up with the letter M on the other, so each letter is replaced by the letter 13 characters away.

Rules for Crypts in the NPL include:

What makes a cryptogram hard to solve?

What makes a Cryptogram interesting?

Almost all the things that make a Crypt challenging also make it interesting.

Sometimes, there is a second message in the decoding. ROT13 is one example of a slightly interesting version of this, but you can't claim to have come up with that. Sometimes, the crypt composer will hide something in the solution alphabets so that, if you write the alphabets out, you might see something like:

Note that, if XYZ were used in the crypt, it would not be legal since they “stand for themselves.” What makes this solution interesting is that the composer has used a specific word to encrypt the solution (Nightowl). This is reported to have been used to help prevent decoding messages; one messenger would carry the encoded message on paper, another would deliver the keyword by another route; without the keyword, decoding the message would be more difficult (but nowhere near impossible).